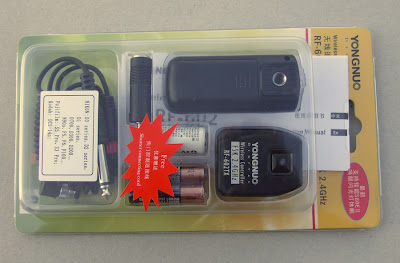 Today I tested my new Yongnuo RF602 wireless flash transmitter , this is what you get in the package . 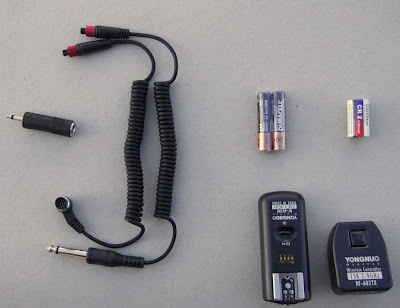 When you look at the instructions you feel like contacting the manufacturers and asking them " Who learned you to spoke english so deliciously ? "

This is a close up view of the transmitter and receiver 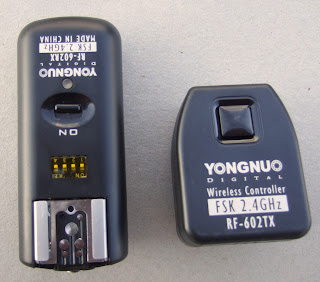 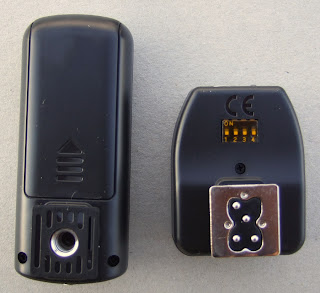 Apparently the two back contacts aren't connected to anything inside which either means they are only there to make it look more 'functional'  or perhaps they are there because the next model [maybe the "903's"] will have TTL functionality !
It was also suggested that they may just be for other cameras and the wiring gets connected for the brand you choose .
There are contacts so you can use them to trigger the shutter release of some cameras at 100m . 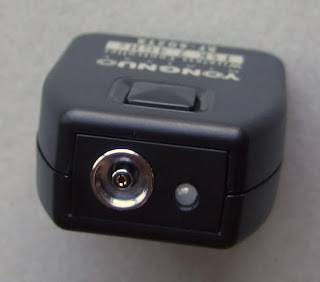 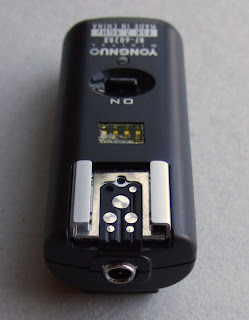 Then I set up the tripod with my old SB24 so I could test the fastest trigger time
[ which they advertise as being 1/250th sec - mainly because that's the fastest time most cameras can synch flash ] , and the furthest distance it could work at . 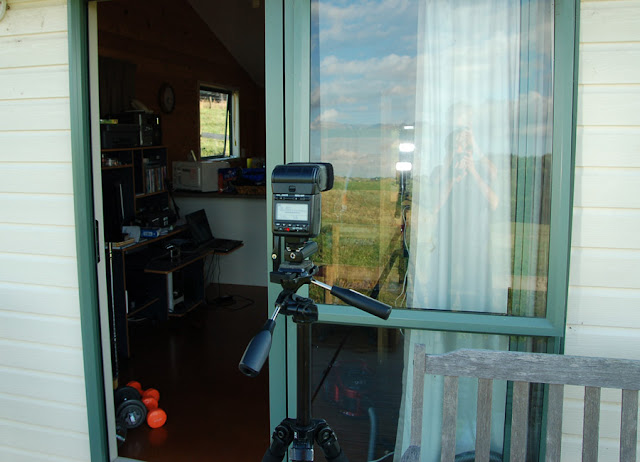 I used the D50 because it has an electronically switched sensor/shutter so it can synch flash at 1/500th sec normally and if it doesn't know there is a flash connected - as with a wireless trigger - there is no limit to the shutter speed you can use with flash .
I explain this in my blog on realsynch flash
Standing next to the flash I managed to trigger it at 1/800th second . 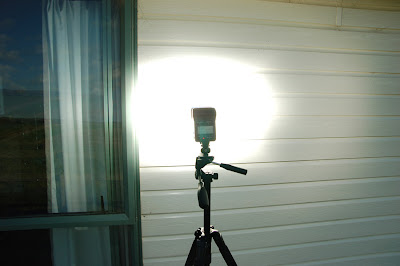 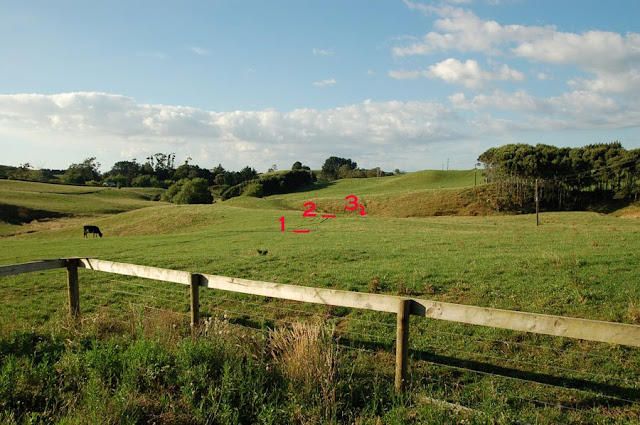 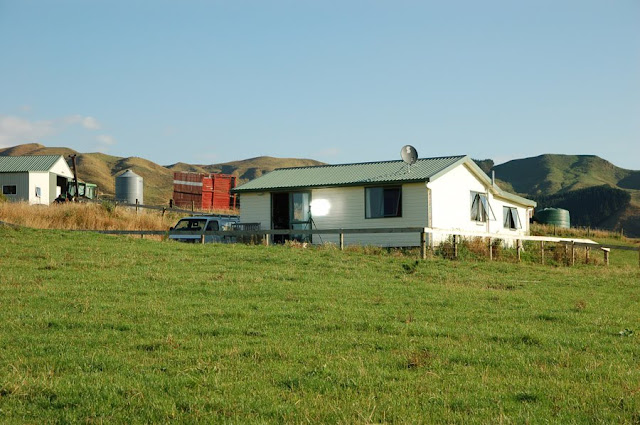 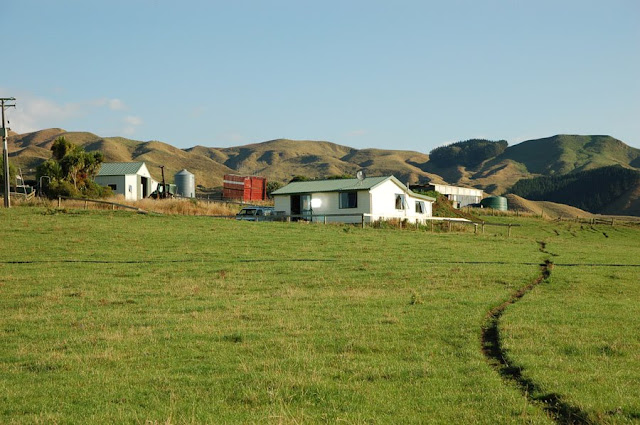 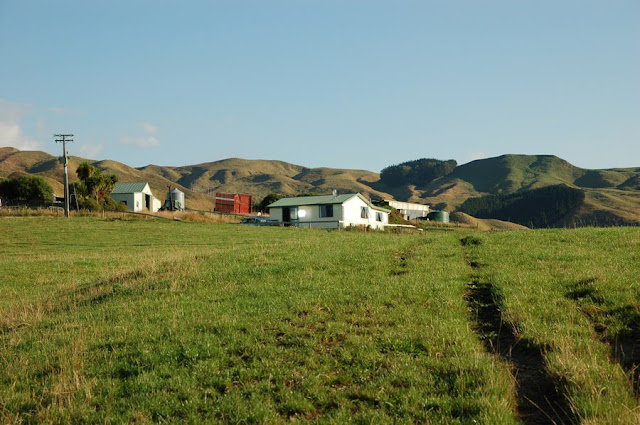 I ran and took 96 large strides to get back so perhaps it is more than 100m .
As another test I took I went to the milking shed and placed the tripod with the flash on it behind a metal door and between two large metal tanks to make it as difficult as possible . The flash still fired ! I think that's covered every possibility that I could come up against at any distance I could need it to work at . 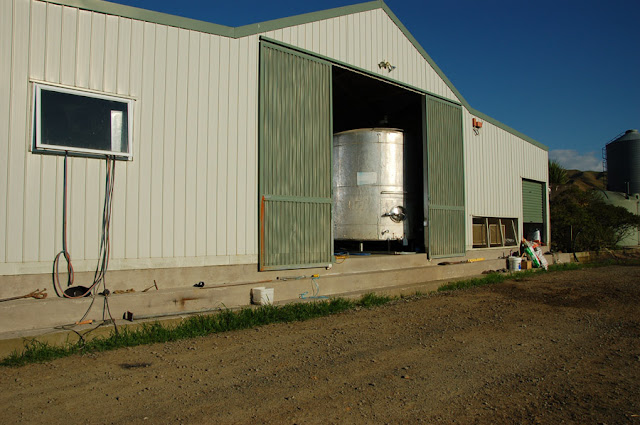 As a side issue we were discussing the possibility of transmitting wireless TTL on nikoncafe . This has been done with the radiopoppers but we  also spoke about the fact that the RF 602's wake up the SB800 flash from standby  mode with a half press of the button but can't wake the SB600's and won't let the SB900's go into sleep mode so we did some measuring and this is what mike66 of nikoncafe came up with ....

" Here is what I found on the left rear contact of the speedlights. When active, each contact had a DC component with a negative going square wave pulse. When in standby, the contact was zero Volts.


The SB-800 had another interesting surprise on the front right contact, which neither of the other speedlights shared. When the speedlight was active, this contact had a positive going square wave pulse train of 2.5V. The pulse width is 2.5ms and the period is 250ms. When the SB-800 went into standby, the voltage on this contact was zero with no pulse train. "

As we learn more about the RF 602 wireless flash triggers perhaps we will find a way to make them work properly with the SB600 and SB900 . Perhaps Yongnuo will just make the next product work properly ? They probably took a D200 and SB800 and reverse engineered the contacts thinking that it would work with any flash .  For now anyway they are still a pretty powerful product considering what they can do compared to other cheaper flash triggers .