With today's electronic cameras we have to be careful about fitting older flashes to a camera .
The most important thing to check with an older flash that you intend using is the " trigger voltage" . There is a list of trigger voltages on this site   as a general guide but always check for yourself .
Many of today's compact cameras can't handle more than around 6 volts - check what the manual says !
Then check the trigger voltage of the flash you want to use and decide for yourself .
The better DSLR's can handle up to 250 volts but you decide for yourself if you are prepared to take the risk of putting an old piece of 'electronics' on your expensive camera .


So you've checked the manual to see what your camera can handle , now look up the trigger voltage of the old flash on the site I mentioned at the beginning and then measure it yourself to be sure .
Have a look at this old flash I received today - I thought I may as well get some pictures before I dissect it . 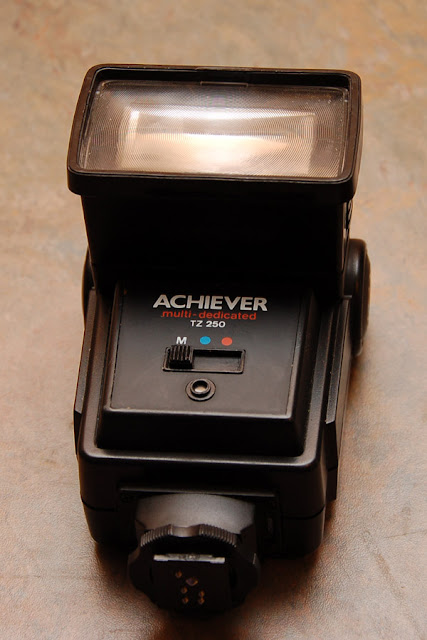 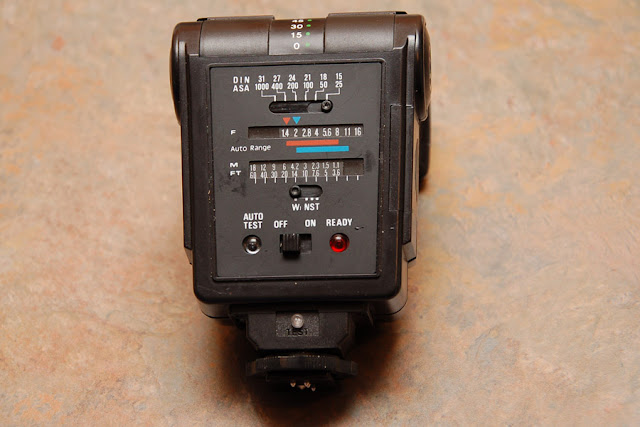 There's a reason why the 'test' button is right at the base of the flash - it's easier to fit there because the wires it joins together go right to the base of the flash as well . This is a wiring 'schematic' showing what the wires inside look like , they go to that button which is a switch that joins that pin in the centre to a  not too easily seen earth contact on the side .
These are the contacts you need to join manually for stop motion photography . 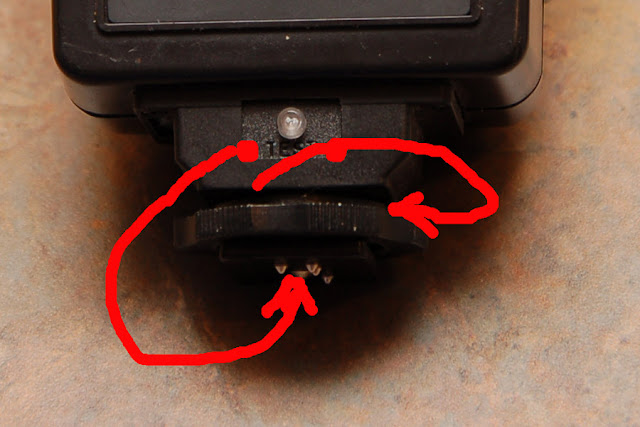 These are the two important contacts , you are probably better off covering the other contacts with a piece of tape or something because the camera may not like the flash talking a strange language to it and may refuse to fire if those pins confuse it with their "ancient dialect " . You can also buy a 'safe synch' adapter if you don't want to bother with checking voltages - they supposedly protect your camera from any voltage an old flash can put out .

So put your multi-meter on the 200-500 volts scale just in case [ I've measured these voltages at up to 220 volts previously , try putting a 12 volt light bulb in a 240 volt socket to see what could happen if you put the wrong flash on a compact that is made to handle 6 volts ! ] - put the leads on the centre pin of the hotshoe and the hard to reach contact on the side of the hotshoe and see how many volts it registers [with batteries in the flash , and the flash turned on , and the 'ready light' lit of course] . 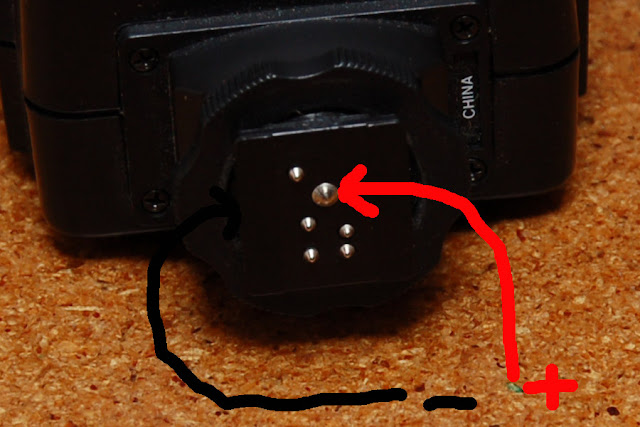 In this particular case the meter showed a negative reading of "-8" volts . The earth pin is in the centre of this flash and the positive contact on the side - curious .


So 8 volts is pretty safe in my books - but the negative voltage ? For that reason I would test it on my old D50 before trying it on the D90 .


Now we look at the controls ...... It looks like this flash has many inputs but we eventually find out that if it isn't going to work in auto mode via the other communication pins at the base of the flash ... there is only in fact one 'electronic' control - the on-off button !
Looking at the bottom "W NST" simply refers to whether you have the flash head zoomed to any of those positions , moving it to one of them will simply slide a distance scale to tell you what working distance you have - minimum and maximum . The minimum distance refers to the closest you can get without over-exposing since there is also a limit to how weak a flash can fire !  The red and blue stripes would probably be your reference , depending what mode you have chosen . 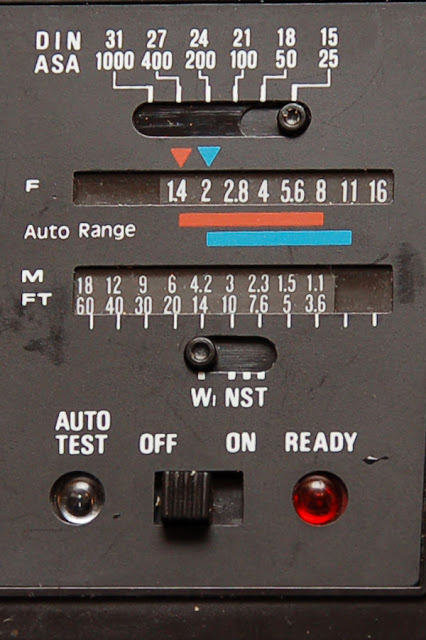 And on the front  you can choose between "M" for manual and "blue" mode , or "red" mode - two supposedly semi auto modes . 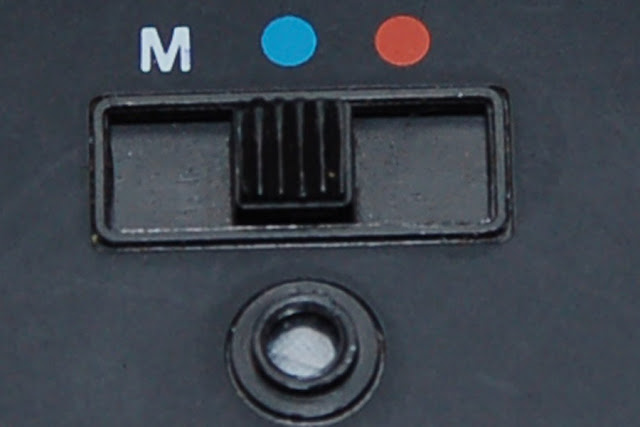 The crazy thing is that the switch on the front is ''mechanical" in it's operation - there is nothing electronic about it . In the hole is a thyristor control that measures the light reflecting back from the subject when the flash fires and stops the flash when it measures a certain amount of light . The three settings are simply different ''filters'' that move in front of this window .
In the 'blue mode' there is a hazy piece of plastic that moves in front of the sensor and simply makes it harder for the thyristor to 'see' the light coming back ... twice as hard actually as we will see from the settings .
So because only half the light reaches the sensor in this mode the flash fires twice as powerful as 'red mode' meaning you can use a smaller aperture . if you look at the two arrows on the selection scale they are one stop apart = F1.4 in red mode or F2 in blue mode .

Here's 'red mode ' , basically a clear window that allows the sensor to 'see' the light better and switch off sooner ..... talk about amazing technology ! 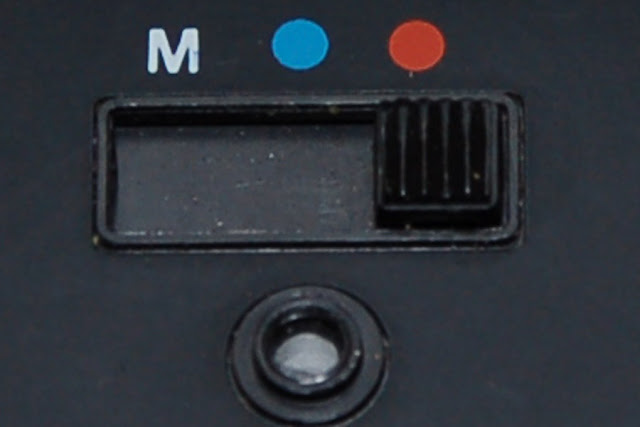 What of manual mode ? ...... that's like putting a lens cap on , moving the slider to "M" simply slides a piece of black plastic across the 'eye' ..... the sensor doesn't 'see' any light from the flash and so fires at full power each time - it is still actually in auto mode but since it can't get a reading it will naturally fire at full power . 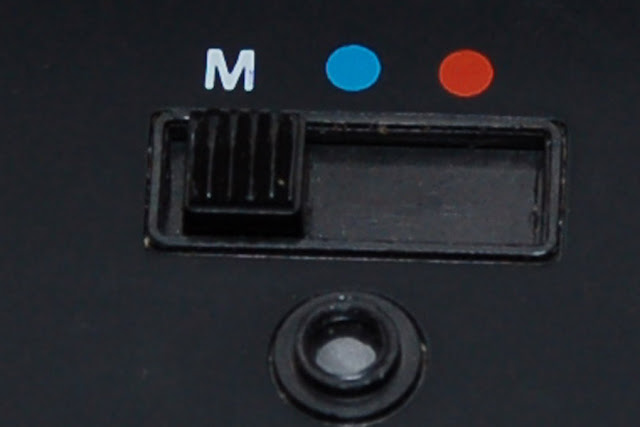 Now the other slider on the back of the flash - this also shows that the flash is actually set for one particular output based on the thyristor reading - the "hazy filter" in the red and blue modes simply affects the sensor reading to give the appearance of two power levels . The settings on the back are simply different combination's of each mode for exactly the same output . 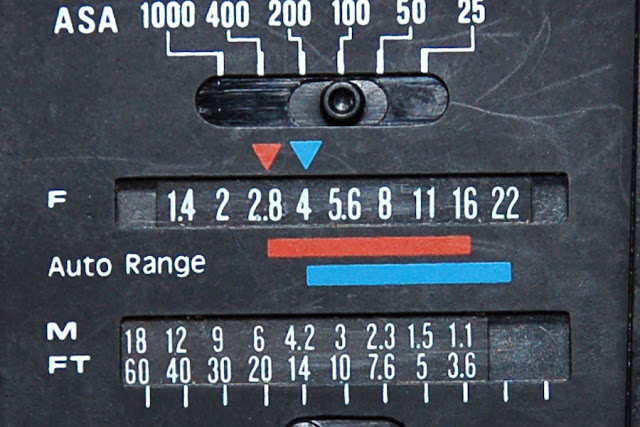 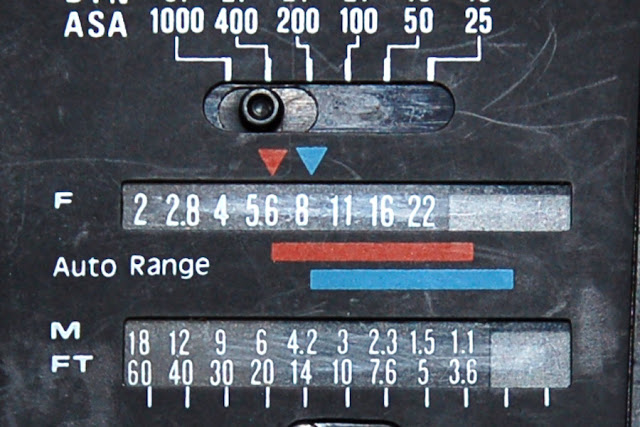 If we were at iso 100 in red mode for example we would have to shoot at f2.8 to get enough light from the flash at the basic output it is set to , to achieve a correct exposure .
By moving to iso 400 and effectively amplifying all light entering the lens 4X we can go to a smaller aperture - two stops lower , to f5.6 . Due to the inverse square law and the fact that aperture is a ratio of diameter  F5.6 lets in 1/4 of the light as f2.8 ....... a factor of 4 as with the change from iso 100-400 . They cancel each other out - multiply the light by 4 with iso and divide it by 4 with aperture .


So none of those sliders change anything in the flash - they just tell us what settings to use to get the right exposure for what the flash is designed to put out . Of course we don't have to obey the flash settings - if the results are consistently wrong , too bright for example , we could use a lower iso or smaller aperture than suggested to achieve the results we prefer . 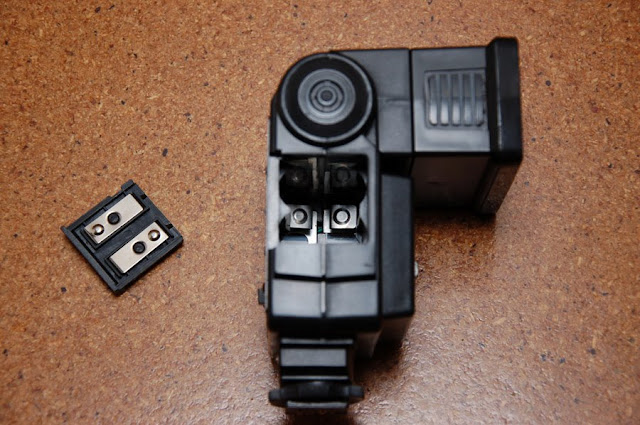 This flash was good inside considering its age . I won't be using it on my camera , I have some 'experiments' to perform on it and just thought I'd share what I know with those who intend using an older flash on their camera .... good luck !

Posted by Desmond Downs at 2:15 AM